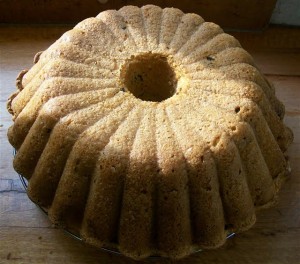 For our family, New Year’s Eve is usually a quiet day at home, with maybe some friends over for dinner, or a special New Year’s Eve service at church. I like to cook traditional New Year’s recipes on New Year’s Eve, one being a rich, buttery yeast cake baked in a fluted mould, called Breudher. I first heard of Breudher in a lovely old cookbook I bought second hand somewhere, named ‘Love and A Wooden Spoon.’ I completely agree with the author, Charmaine Solomon, on her thoughts about New Year’s Eve…

“On New Year’s Eve I really like being at home in the quiet of my kitchen, up to the wrists in flour. I just have this feeling that it’s a good way to start the year, doing something as basic and comforting as making bread. As I knead and mix and bake I get to thinking that in spite of the gloomy headlines and the unpredictability of life in general, nothing is going to happen that, with God’s help, I can’t handle.”

This is my adapted version of her recipe for Breudher. (The Thermomix version first, the handmade version second.) This recipe makes plenty so you can share some with friends – two large, three medium-sized or four small cakes. Bake in a baba mould, or kugelhupf pan, or tube pan, or if all else fails, loaf tins or deep cake tins. Serve it with slices of cheese and fruit, for a delicious New Year’s Eve supper, or for brunch on New Year’s Day.

Note: You can find Fine sea salt for this recipe in my online store here! 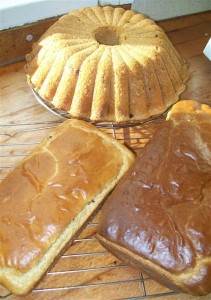 3. Add, beating until smooth on speed 6:

4. Add and mix on speed 6 until a soft dough forms:

5. Knead on interval setting for 2 mins. If there is too much dough for the bowl, remove half and knead in two lots. If the dough is too soft the motor will begin to labour and you will need to add some more flour through hole in top of lid as it mixes.

6. Place dough into greased bowl and turn dough over so top is greased. Cover with plastic wrap, leave to rise until doubled in size. Clean out Thermomix bowl.

9. When dough is ready, punch down and add to creamed mixture in small pieces with Thermomix running at speed 6. Beat until all dough is incorporated, assisting with spatula. (If it seems a bit much for the speed, use interval speed.)

10. Remove half of mixture to a bowl. To the half of the mixture left in Thermomix, add:
– 3 large eggs, beating on speed 6 until incorporated. Remove to large bowl. Repeat with other half of mixture (6 eggs in all) then add to mixture in large bowl. 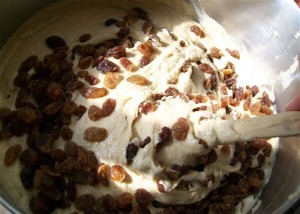 12. Generously butter cake tins. Put mixture into tins, but don’t fill more than half full, as they rise a lot!! 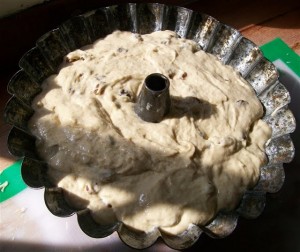 Place tins into cold oven and leave to rise for 10 minutes. Turn oven on to 170° C (350° F) and cook for 30 minutes or so, until golden-brown on top and a skewer in the middles comes out clean. Cool in pans for 10 mins, then turn out on wire rack and cool a bit more before cutting. 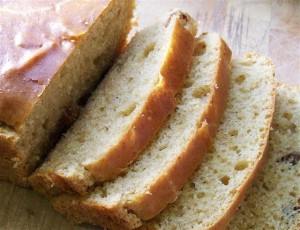 6. Lightly flour table, turn out dough, and knead until smooth and elastic, about 12 mins. Shape into a smooth ball, put into greased bowl and turn dough over so top is greased. Cover with plastic wrap, leave to rise until doubled in size.

7. While dough is rising, blend in blender until powdered:
– 120g Rapadura

9. When ready, punch down risen dough and add to creamed mixture in small pieces with mixer on medium speed. Beat until all dough is incorporated, then add:
– 6 large eggs (add one at a time, beating well after adding each one)

11. Generously butter cake tins. Put mixture into tins, but don’t fill more than half full, as they need room to rise. Leave in warm place until doubled in size.

12. Heat oven to 170° C (350° F). Bake cakes for 30 mins, or until risen and golden-brown on top, and a skewer in the middle comes out clean. If browning too quickly, place foil over cake. Cool in pans for 10 mins, then turn out on wire rack and cool before cutting.

So… have you started a garden yet? 😅 My bean

How important are the friends and community we sur