Aaaah, there’s nothing better than homemade bread, hot out of the oven… except maybe homemade hot cross buns hot out of the oven!! But if you really can’t be bothered with making buns and piping all those crosses onto them, try this recipe instead for an Easter treat… It’s so easy and delicious, and one recipe makes two loaves of pull apart bread – one to keep, one to share! (Or maybe one for morning tea, one for afternoon tea – it’s very addictive!)

First you need to make a batch of hot cross bun dough and rise it in a warm place until nearly doubled in size. (I roll it up in my Thermomix silicon bread mat and let it rise in there.)  Your dough should be nice and soft, even slightly sticky – if it’s too dry you’ll end up with tough bread! While your dough is rising, make up a batch of honey-cinnamon butter in the Thermomix and set aside. Prepare two bread tins by lining with baking paper.

Once your dough is risen, punch it down on the bread mat, and spread it out flat with the heels of your hands into a large rectangle. The thickness is up to you – I like it about 1 centimetre thick. (You can use a rolling pin if you like, but I find it’s quicker to use my hands, and doesn’t stick like it does to a rolling pin.) Next, spread on some of the honey-cinnamon butter, then cut it into four strips, using the spatula so you don’t cut your silicon mat! Stack the four strips on top of each other, and cut them into six pieces (cut in half, then in two lots of thirds)… Place three of the stacks into each lined bread tin, cut sides facing up… Using your spatula or fingers, fan the pieces of dough apart… Rise again until nearly doubled, then place in cold oven and turn it on to 180 degrees C and let the bread rise and bake for about 30 – 40 minutes, or until golden brown, and browned underneath. (Pull it apart slightly in the centre to check that it’s done.)

Now for the syrup.

Juice the orange that you used the zest from for the dough. Measure 50g of the juice into the Thermomix bowl, add 50g Rapadura and 1 tsp cinnamon, and cook at Varoma temp for 2 minutes, speed 2. Drizzle the hot syrup over the pull apart breads. Enjoy it while it’s warm!

Or wrap some up for later… it won’t last long! 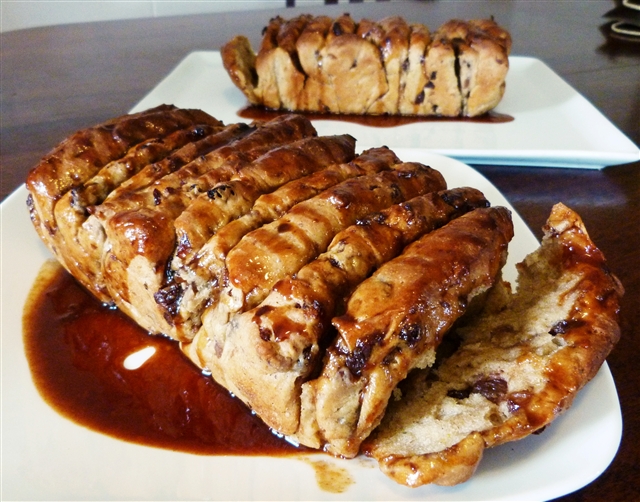 Variation: You can make a glaze to go over the top instead of the orange-cinnamon syrup – just use 50g finely ground Rapadura (or raw sugar) and 50g rice-almond milk, whizz it up, and drizzle it over.