On Sunday afternoon’s I usually bake bread, and today was no exception, even though the weather was awfully hot and sticky, and I wasn’t really sure I wanted to turn the oven on… My brain didn’t seem to be working too well either, and it took me ages to decide what kind of bread to make. I finally came up with the idea of experimenting with caramelized onions in the Thermomix, so I could make some onion bread.

I know a lot of people love caramelized onions (including me!), but don’t think they can make them in the Thermomix because of the low heat it cooks at. Well, I did it! They ended up so mild and sweet and delicious, and the bonus was I didn’t have to stand over the hot stove stirring them.

I also added some garlic, herbs, and Kalamata olives to my bread for extra flavour, and it turned out lovely. The whole, gigantic loaf was quickly demolished tonight at supper after church. I was in a rush and didn’t get a photo taken before I left home, but thankfully a friend loaned me their iphone so I managed to snap a couple of photos before it was all gone! Hope you like it as much as we did.

Note: You can find Fine sea salt, Aussie pepper and Organic Garlic for this recipe in my online store! 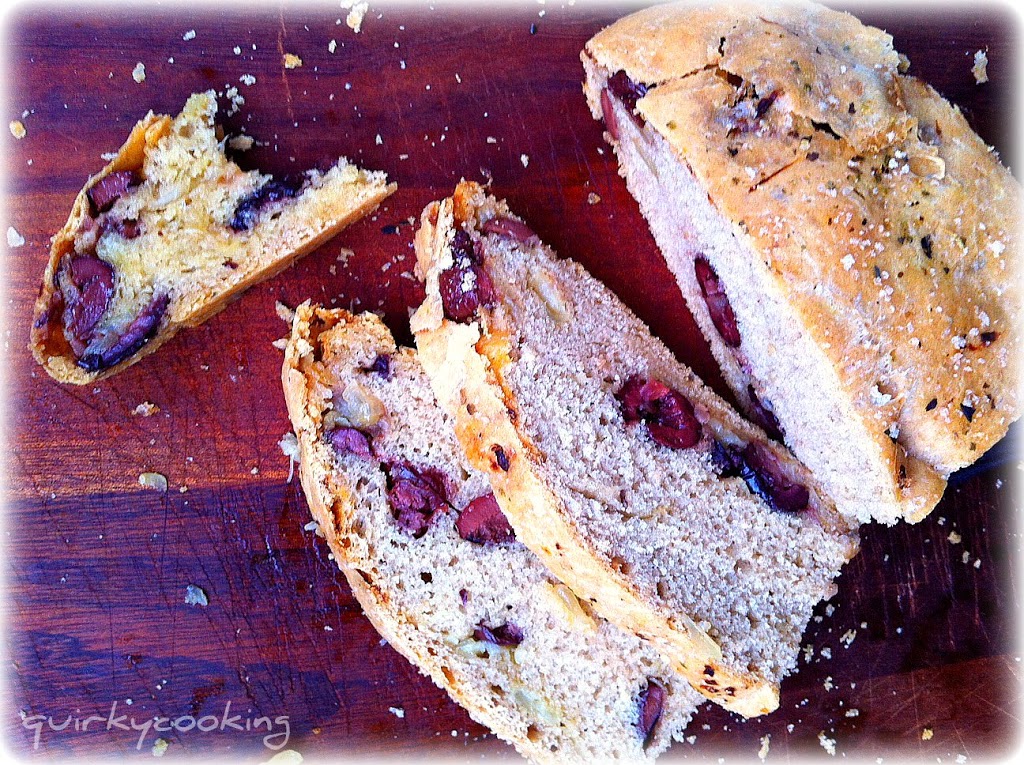 First make the bread dough.
1. Mix together all the dough ingredients on speed 6 for 6 seconds:
– 500g unbleached white spelt flour (or part wholemeal)
– 3 teaspoon instant dry yeast
– 30g extra virgin olive oil
– 1 or 2 teaspoons sea salt
– 2 tsps mixed herbs (dried)
– 270g lukewarm water
2. Turn dial to closed lid position, and knead on interval speed for 1 1/2 minutes.
3. Remove dough from bowl, wrap loosely in a silicon breadmat (or place in an oiled bowl, turning over once, and cover with plastic wrap). Leave the dough to rise while you prepare the onions.
[Note: you may need to change the amount of flour or water a little if you use wholemeal flour. It’s best to have the dough a little bit sticky, but not so sticky that it’s unworkable.]
Caramelizing the onions (and garlic) & preparing the olives.
1. Place in Thermomix bowl and chop on speed 5 for 3 seconds:
– 2 garlic cloves
– 2 large onions, halved
(I used brown onions, but red onions would be lovely too.)
2. Add ghee or butter and cook at Varoma temperature for 25 minutes, reverse, speed soft, with the MC off so steam can escape:
– 70g ghee or butter
3. You will find there is some browning on the bottom of the bowl – it will come off easily, just rub it off with the Thermomix spatula and mix it into the cooked onions. It adds flavour! 4. Set onions aside to cool a bit.
5. Roughly halve (and deseed) the olives and set aside:
– a couple of big handfuls of whole Kalamata olives
(or other olives if you prefer.) Prepare the bread.
1. When the dough is risen (doubled in size), punch it down and flatten it out on the silicon bread mat with your hands, forming it into a large rectangle about 2 cms thick.
2. Sprinkle the dough with the olives and onion. (Scoop the onion out of the Thermomix bowl with the spatula, leaving the melted ghee/butter behind.) 3. Roll the bread up into a long loaf. Or roll up into a sausage shape then twist into a circle so the ends join up. (I made a roll, twisted it into a circle, then squished it together a bit to make a round loaf. Because my dough was soft and a little sticky, it molded together easily.)
4. Place loaf onto a baking paper lined tray, and brush with the remaining melted butter/ghee in the Thermomix bowl. Sprinkle with some extra herbs and some sea salt flakes. Place loaf into the cold oven. 5. Leave the bread for 5 to 10 minutes to rest, then turn oven on to 190 degrees C and cook for about 30 minutes, or until outside is browned and crusty, both on the top of the loaf and underneath. (In some ovens, you may need to turn the loaf over to brown underneath for the last 5 minutes.)
6. Allow to cool for a few minutes before cutting.