Chocolate Espresso Brownies with Vanilla Cashew Cream
{grain free, dairy free, gluten free, nut free (without the cream), naturally sweetened}
You’re probably thinking, ‘Why is she posting ANOTHER chocolate brownie recipe?? She’s already posted Marike’s Coconut Flour Brownies, Flourless Chocolate Hazelnut Brownies, Nut Butter Chocolate Swirl Brownies, Flourless Chocolate Brownie Cookies, and even Waffle Iron Brownies!!’ Well, I just can’t help myself – I love brownies. And I’m always chasing the elusive recipe for the perfect, healthy, naturally sweetened brownie! Besides, so many people on Facebook begged me to post this after I shared the above photo that I thought I’d better do it, before there was a riot!!! 😉
So for all my fellow chocoholics, here’s my latest gluten free, dairy free, nut free, naturally sweetened brownie recipe – let me know what you think. My recipe testers declared it perfect after my first batch, and wanted me to blog it immediately. I did make it once more though, just to check I had it right the first time… although I made the second batch into Chocolate Pistachio Brownies. YUM! So if you aren’t keen on the espresso idea, try the pistachio variation below instead. And if you can’t have chocolate, you could use carob powder instead of cacao.
These brownies are actually a lot better the second day. When they’re hot, they’re lovely, but the flavour isn’t as rich, and the texture is lighter. So if you can bear it, let them sit for a day (covered, just at room temperature), and they’ll become moister and fudgier and richer tasting. (If you’re like me, only about half of them will get to this stage, though. Ha ha!)
Don’t forget to check out the Chocolate Pistachio variation below, too.
Note: You can find fine sea salt for this recipe in my online store here! 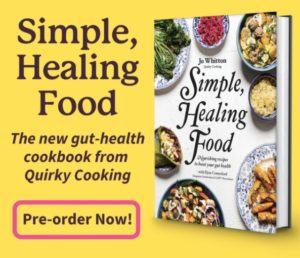