Here’s a deliciously simple recipe you can whip up at short notice… I made it tonight on the spur of the moment, and thought I’d better share! (Especially since there’s going to be a riot on my Facebook page if I don’t!!) You can make them either with gluten free flour, or spelt flour. They are dairy free and vegan and nut free, so that should keep quite a few of you happy!

The mudcake recipe is one I posted ages ago, with a recipe for orange sabayon.

For this raspberry version, just sprinkle some raspberries in the bottom of your silicon cupcake molds, pour the chocolate batter over (only to just over half way), and steam for 20 minutes at Varoma temp, speed 2. While cakes are cooking, freeze a tin of coconut cream, unopened, without shaking it up. This is just so the thick cream rises to the top and gets firm – it doesn’t need to be frozen. You’ll also want to pick out enough whole raspberries for on top of the cakes, and set them aside.

When cakes are done, let them cool while you make the raspberry cream. If you love these little teacup and saucer silicon molds, you can buy them here!
Tags: cakeschocolatedairy freedessertsEgg FreeGluten FreeThermomixVegan
ShareTweetPin13Send
Previous Post 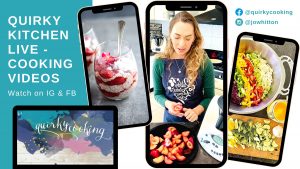 I love Saturdays at home, just pottering around th

Happy weekend! Hope you’re all getting a bit of

I was recently interviewed by @goodfoodau on "How

Hey everyone! I’m slowly getting back to work th

One of the perks of living in Far North Queensland

Happy new year, everyone! 🎉🎉 As we venture i

Got leftover bits of cheeses in the fridge from Ch

Please tell me I'm not the only one feeling unprep