Photo by Arwen’s Thermo Pics
I love Mexican food. Well, maybe I’m really talking ‘Tex-Mex’ food, as that is what I was raised on.  My parents are from south-west Texas, and my big sister was born down on the border of the southern tip of Texas, where it pokes into Mexico, in a town called McAllen. Down there, you have to look hard to find signs in English; the shop assistants greet you in Spanish (much to my confusion as a teenager) and the food is awesome! (Albeit rather SPICY!!) My big sister & I at our friend’s house in Mexico, 1978
My family moved to Australia just before I was born, and I grew up mostly in Far North Queensland, with occasional trips back to Texas. My friends always found the food we ate quite fascinating. Most of them had never even heard of tortillas (which is NOT pronounced tor-till-uhs, but tor-tee-ahs!), let alone refried beans, fajitas or enchiladas. They didn’t have leftover cornbread for breakfast like we did, either mushed up with milk, or toasted and dripping with melted butter and maple syrup. And if you mentioned jalapeños, chimichangas, huevos rancheros, hominy or tamales, they just looked puzzled. Unless they’d been over for dinner before… then they looked hungry! They knew if Mum was cooking Tex-Mex, they’d better find a way to get invited to stay. Same as when she was cooking fried chicken. But that’s getting off the topic… Sauteeing capsicum for fajitas, while cooking up some spelt tortillas
So fast forward to 2012, and Mexican food is much more well-known in Australia. In fact, it’s quite ‘the thing’, with authentic Mexican restaurants popping up around the country, online suppliers selling everything from ancho chillies to masa harina (for making corn tortillas), and Mexican food trucks cruising the city streets. Hey, I can even buy masa harina, hominy and tomatillos from my local IGA, and I live practically in ‘the sticks’!! I’m loving this new awareness of Mexican (and Tex-Mex) food, because this is the home cooking I grew up on, and it says ‘comfort food’ like nothing else does. Being an incurable chocoholic, one of my favourite Mexican dishes is the national dish of Mexico, ‘mole poblano’ (pronounced ‘MOH-lay’) – a thick chocolate chilli sauce, complex and delicious, which is usually served over turkey or chicken.
Many legends surround the origin of mole poblano. The most common one goes like this. Sometime in 1680’s at the Convent of Santa Rosa in Puebla, the convent nuns heard that the archbishop was going to pay them a visit. They went into a panic because they were poor and had almost nothing to feed him. They prayed, and brought together the little bits of what they did have: chillies, spices, day-old tortillas, nuts, a little chocolate and more. They made a thick sauce out of these ingredients, killed an old turkey they had, cooked it up and served it with the sauce. The archbishop loved it. Mole poblano was born. [via this article and Wikipedia]
Every region of Mexico seems to have their own version of mole. It can be anything from dark, thick and chocolatey, to soup-like and bright green. There are red, yellow and black moles, some are served with turkey, chicken or pork, and some with vegetables. “All mole preparations begin with one or more types of chili pepper. The classic moles… such as mole poblano and mole negro, include two or more of the following types: ancho, pasilla, mulato and chipotle.Other ingredients can include black pepper, achiote, guaje (Leucaena leucocephala), cumin, cloves, anise, tomatoes, tomatillos, garlic, sesame seeds, dried fruit, hoja santa and many others.Mole poblano has an average of 20 ingredients; mole almendrado has an average of 26, and Oaxacan moles can have over 30.Chocolate, if used, is added at the end of cooking.” [Wikipedia] Some moles contain ground up nuts or pepitas, ground up cacao nibs or beans instead of chocolate, cinnamon, jaggery (similar to Rapadura), and even plantains! As you can see, there’s lots of room for experimenting, so feel free to add to my recipe and tweak it to your taste. I don’t have access to Mexican chillies where I live, so I just used regular red chillies – but if you can find ancho, pasilla and mulato chillies (lucky you!), try those. This recipe will give you an idea of how to use them – they’re not super hot, they’re kind of smokey.
Traditionally, mole takes days to make. The ingredients are roasted and ground up first, which, if done by hand, takes a full day in itself. The resulting powder or paste (depending on the ingredients in it) is mixed with broth and simmered in a heavy clay cauldron until it becomes a thick sauce. It has to be stirred constantly so it doesn’t burn. That’s the traditional way, which obviously isn’t done so much these days. Mostly people just buy a mole paste in a jar and add stock, a bit like making a curry from a jar of curry paste. Slow-roasting the tomatoes, onions and garlic
As you know, I’m all for making quick and quirky versions of my old favourite recipes, using basic ingredients and my trusty Thermomix. (See for example Spelt Tortillas, Mexican Quinoa, Fajitas, Dairy Free Sour Cream and Mexican Black Bean & Chorizo Soup.) My version of Black Bean Mole won’t take you days, although it IS more time consuming than most of my recipes. But it’s totally worth it.
Note: If you’re looking for black beans (also called turtle beans), you’ll most likely find them at your local health food shop, or maybe in the International aisle of your grocery store. But if you can’t find them, try kidney beans, or even a mixture of beans. In the mole below, I used a mixture of green lentils, black beans, and pinto beans. Still tasted great!
Note: You can find Fine sea salt, Aussie Kibble Pepper and Organic Garlic for this recipe in my online store! 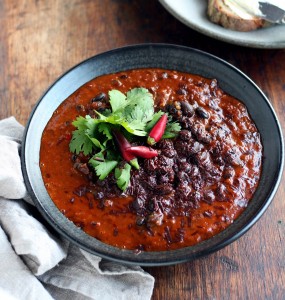