When my kids were little, their favourite Christmas tradition was eating gingerbread ‘star biscuits’ and drinking ‘pearl tea’ (hot water, almond milk and honey), while dancing around to Christmas music under the Christmas lights on the back deck. Every year they’d get so excited when we made star biscuits, and every night was a party under the lights with pearl tea and biscuits, until they were all gone!

Nowadays the kids are a bit older, and I haven’t noticed any of them dancing to Christmas carols… but they still love star biscuits, and have been asking me for weeks to make a grain free version they could have, since we’re on GAPS!

So here’s what I came up with… The recipe is based on my original gluten free gingerbread biscuit recipe, but instead of gluten free flour I’ve used almond meal and coconut flour. I’ve also changed the sweeteners to dates and honey (to suit GAPS), but feel free to play with the recipe and use whatever sweetener you like, to taste. They’re not quite as crispy as the original version, but my kids say they actually prefer the slightly-chewy version, so YAY!!

These will obviously be great for making gingerbread men too, but wouldn’t work so well for a gingerbread house, I think… unless it’s a very small house! (I could be wrong… if you try it let me know!)

This recipe is grain free and gluten free, GAPS & Paleo friendly, and has egg free and dairy free options. It makes about 4 dozen biscuits (depending on size of cutters). Dough can be frozen for later use – roll into a cylinder shape, wrap in parchment paper, and freeze; cut slices off end for round biscuits to cook as wanted.

If you’d like to make marshmallow icing to decorate, use the recipe in this post. It won’t harden like royal icing, so ice just before eating. 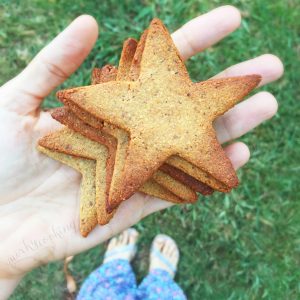 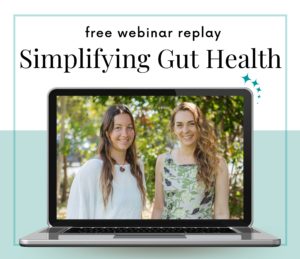 These kids MADE MY DAY today!!! I mean, check out

Yummy Veggie Bake. Do you ever feel terribly bored

Gut health can be a confusing topic. I think liter

How's the hot cross bun baking going? 😃 If you'

CHOCOLATE!! Want to make your own for Easter? Here

Slow-Cooked Lamb Roast Dinner. We had friends over